Editor’s Note:  I have said that The Next Ten Words will be a collective of some of the best writers you’ve never heard of, and today we fortify that statement. Kevin Krein is a dear friend with whom I have worked for a few years. I am beyond thrilled to announce that he is bringing his distinctive voice to NTW.  Ladies and Gentlemen, we present to you The Column of Disquiet. 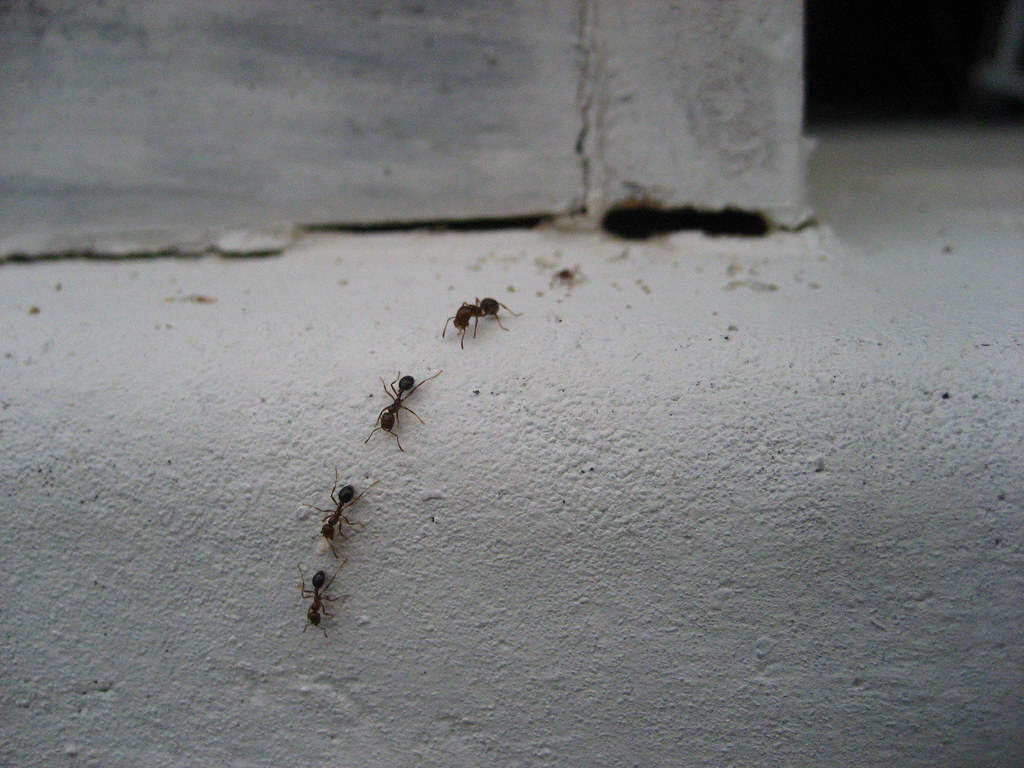 A common reaction to finding a bug in your house is to say, possibly in a louder than normal voice, “Ack! A bug!” But what do you do next?

Depending on what kind of person you are, or at least, are trying to be, your instinct may be to squish the bug immediately upon discovery, or, if you are like me, and are attempting to be slightly kinder to as many living creatures as you can, you go and retrieve a cup in order to scoop said bug up, and escort it outside, where it is already certainly plotting its way back into your home.

There are some bugs, however, that don’t really deserve your compassion—mosquitoes deserve to be killed on sight, no questions asked, as do gnats, if you can actually find the gnat that you saw flying around, and aren’t just incessantly clapping your hands together in the air, catching nothing in between your palms.

Another bug that doesn’t deserve your compassion is the ant.

Or, in most cases, ants.

There is always going to be more than one ant.

I try to keep our home relatively bug free—both kindly taking spiders and centipedes found in the bathroom outside and setting them free, as well as reflexively destroying the mosquito that has landed on our living room wall.

I do this because I want to shield our companion rabbit, Annabell, from as many bugs as possible. She spends about 99% of her time very low to the ground, and the mere thought of a spider crawling near her, or a mosquito buzzing by her ear is enough to give me a case of the howling fantods.

I feel the same way about ants—I cannot stand the thought of an ant making its way over the topography of our carpeting while Annabell is nearby. But this is how I discovered the current ant problem in our home.

If you have a problem with ants, you expect it to be in certain areas of your house, like the kitchen counter, where something sticky and sweet may have dried, or near an entryway that isn’t sealed very well. The last place you’d expect to find them piling in is in your office/guest room.

No one is eating food in our office, and neither my wife, nor myself, spends a great enough deal of time in there where we would have some how tracked them in from outside.

I discover the ant problem when Annabell wants to be let into the office to go exploring. The door to the office is kept closed, but when she indicates she wants to go in, she’ll sit in front of the door and wait for me to open it for her. After she burst in and scooted under the bed, I took my place on the floor, and that is when I notice the first ant.

The first ant, of course, is followed by the second, third, and fourth.

“Oh fuck,” I say, out loud, as I am smashing my hand down on the ants to quickly kill them while a panic grows inside of me. I continue to look around, and I continue to see more and more ants on the floor, scurrying about.

“OH SHIT BUDDY WE GOTTA GET YOU OUT OF HERE!” I say to Annabell, who is more than likely oblivious to what is happening, as I reach my arm under the bed, give her a gentle nudge that indicates she needs to move along. After she exits, I quickly pull the door closed and grab an old towel which I proceed to roll up and stuff in the space between the bottom of the door and the carpeting in a possibly futile attempt to keep the ants from escaping the office. It winds up look like I’m a nervous college student getting ready to light a fat one in my dorm room, or that I’m going out like Sylvia Plath.

After recovering from the initial shock of this situation, and angrily vacuuming the carpeting in the office, I fight the urge to just blow up our entire house and start over somewhere else. Instead, I head to the internet—a place of factual information—in order to find a list of “home remedies” to get rid of the ants, because using toxic sprays are out of the question, and at this point, I am not yet ready to drive to the hardware store and purchase a package of ant traps.

Vinegar apparently solves every household problem—cleaning with vinegar is one of the options in a list of home remedies I find; as is sprinkling cinnamon, or using cinnamon oil, and that just seems plain ridiculous. To me, using cinnamon seems like a great way to entice even more ants to show up, not get rid of the ones you’ve found.

Sprinkling cucumber peels is also listed as a method one can use, and it just so happens that I have a cucumber in the refrigerator.

After quickly and angrily wiping along the baseboards with a mixture of hot water and vinegar, I take the cucumber in the office, and begin peeling the rind off of it, letting it float onto the floor. Later, when this brilliant idea fails to work (there are still ants) I read that a mixture of dish soap and water will choke them out.

Under our sink, I discover a mysterious bottle of Method brand, cucumber-scented bottle of dish soap. I say it is mysterious because it is truly a mystery as to how it got into our house in the first place, and how long it has been here for. Neither my wife nor myself recall buying it.

I begin mixing it with hot water in a spritzer bottle, and I go to town, hosing down the office floor with this concoction. This, too, fails to work (there are still ants) and I’ve only succeeded in making the office smell horrible from the heavily processed “cucumber” scent from the soap.

It’s at this point that I think I angrily wipe things down, yet again, with vinegar and water, and that I angrily vacuum the carpeting at least two more times. “Fuck you, you motherfucking pieces of shit,” I probably mumble under my breath as I am violently swiping the vacuum cleaner back and forth.

There is a slight reprieve from the ants—maybe a week, or a longer, where I falsely believe I have been victorious in solving the problem. I take away the towel that was wadded up under the door, and I go about my business.

But then, I find more ants.

There is more angry vacuuming, and more angry spritzing of vinegar and water, aggressively scrubbing a rag along the baseboard of the wall and the carpeting, thinking, “I’ll see you in hell, you little sons of bitches.”

To avoid having to come and go from the office while I, again, work on trying to solve this issue, I remove our laptop and its power cable, opting to set it up in the dining room.

As I do this, my wife gives me a puzzled look. “I don’t want the ants stealing our data,” I say to her, keeping such a straight face that she can’t tell if I am being serious or not. And at this point, neither can I.

During this second round of tiny invaders, I think that, at least, I’ve gotten to the bottom of how they are getting into the house. There is a slight crevasse between the baseboard and the wall, and it seems to be quite the hub of activity—therefore, it becomes the target of most of my vinegar and water spraying. I mean, we’re looking at pretty much an ant-9/11 here as I spray, and spray, and spray, and then rub the rag over the same portion of the wall over, and over, and over again.

As I continue to monitor the situation, I resign myself to the fact that fun household remedies cannot compete with the damage that will hopefully be done by straight up poison—so I make that trip to the hardware store and I stare at the options available for ant traps, selecting the kind that I hope will kill them the deadest.

Throughout this entire saga, every time the ants were brought up in conversation, or when I retired to the office for yet another round of vacuuming or scrubbing, my wife would casually sing a little song:

We are the ants who steal your dinner

We have come to take your food away

Because of us you will be thinner

We have come to take away your chow.

This is in reference to an episode of the “Garfield and Friends” cartoon from the early 1990s. The episode, “The Picnic Panic,” is a musical that follows Jon and Garfield as they run into a group of singing ants that try to make off with their picnic lunch.

The song that the ants sing is different than how my wife remembered it, but the sentiment is the same. And the episode concludes with Garfield becoming an honorary ant, because he, like them, enjoys food.

48 hours after setting the ant traps along the baseboards of my office wall, much to my dismay, there are still ants, scurrying around, acting like they don’t have a care in the world. At what point do they enter into the traps, take away the poison, and return home to share it with their friends?

At what point do I tear the baseboard away from the wall, only to reveal the larger problem we are undoubtedly facing?

At what point do I give serious consideration to demolishing this house and starting over? At what point do I start asking the ants to contribute to the household in some way—rent money, help with the chores, et. al?

I think about Annie Potts’ exaggerated New York dialect, telling a client “Well then just don’t go in there,” on the phone in Ghostbusters II, when she advises the homeowner on what to do until someone is able to come and take care of a ghost problem.

At what point to do I resign myself to the fact that we no longer have an office and guest bedroom?

Or, at what point do I welcome my new insect over lords, and like Garfield, try to become one of them?

Kevin Krein has been operating the award winning music blog, Anhedonic Headphones, since 2013, and he contributed the back page column to the Southern Minn Scene magazine for roughly three years. His writing has appeared on Bearded Gentlemen Music, Spectrum Culture, and in River Valley Woman. Follow his tweets—which are certainly written by a human, and not a cluster of ants: @KevEFly.

And if you like what you’ve read here, please CONSIDER THIS

View all posts by Kevin Krein →