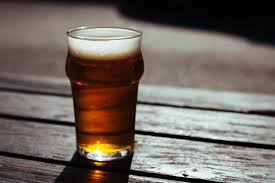 According to Time Magazine, St. Patrick’s Day is the second “booziest” day of the year, next to New Year’s Eve. I have to believe the margin – however they managed to measure it – is razor thin. A whole lot of you will be out on the 17th looking for Guinness, Jameson and green beer (Really? Drinking Bud Light with food dye in it makes you feel more festive? Whatever, dude. Knock yourself out.) I know this because I used to be a bartender. For four years, I worked at a popular British Pub in a college town with a killer patio and an outstanding beer selection. I worked with a lot of outstanding professionals, and got to know some truly fantastic people. I loved being a bartender. Loved it.

Except when I didn’t.

I used to joke that there was this thing that happened to me after midnight. I went from the affable, easy going smartass guy who wants to make you a great drink, to a surly, condescending crabass with a very short fuse. I lost my temper more than once with out-of-line customers, and I was never proud of it. It’s part of the reason I got out of the business altogether. Best to leave before something really bad happened.

But, just because I’m out, doesn’t mean I’ve forgotten the lessons. And, frankly, now that I don’t have to worry about offending my clientelle, I can offer some bar wisdom. Maybe some of this is telling tales out of school, and some of it is divulging industry secrets, but it’s for everybody’s own good. I still love my service industry brethren, and I hope that this will do them some good.

First and foremost, you really do need to tip your bartender (and your server too, for that matter). I tell you this for your own good. Yes, Minnesota requires that restaurant employers pay their employees at least minimum wage, but nobody working behind a bar or serving you cocktails thinks the work they do is worth $8 an hour. It’s hard damn work. It’s long, long hours spent on your feet almost the whole time. Breaks can be hard to come by, especially when the place gets busy. And the person behind that bar is a skilled worker. There’s a lot more to the job than filling your glass with beer. Every time you buy a drink, throw at least a dollar in their jar, or put at least 15% on your tab. I promise you there’s direct a relationship between the number of times you tip and the amount of time you spend waiting for your drink. Also, don’t just round up to the nearest dollar. Unless you received truly poor service – then you’re under no obligation to tip anybody – a $.06 tip is a much bigger insult than getting stiffed. And being a college student doesn’t exempt you from this process. You’re receiving the same service as everybody else, and those people aren’t serving you for their health or the greater good. If you can’t afford to tip them, then you can’t afford to go out.

Secondly, nobody wants to cut you off. If a bartender let’s you know that they can no longer serve you alcohol, it’s because you’re absolutely destroyed. They aren’t doing it to be vindictive, or to mess with you. They’re cutting you off because there is an insane amount of liability that goes along with the job. If they over serve you and something terrible happens, they will get fired, and they could very well go to jail. Believe me, they don’t want to cut you off. They know you’re going to argue about it, and they know it could become a thing. They wouldn’t go through the hassle of all that if they didn’t have to.

Along those same lines, if you aren’t 21, please don’t even try. The amount of crap that can come down on a bartender for serving a minor is mountainous. Job loss, jail, worse yet, the establishment where they work can have their liquor license revoked. One stupid nineteen-year-old kid who looks twenty-three can put a bar out of business because he wanted a Long Island Ice Tea. So, when a bartender asks for your ID, please don’t be offended. This is serious business.

And, to newly minted, just-turned-21 adults, congratulations. You made it! We’re happy to give you your very first drink for free (either a tap beer or a rail drink), but not at one minute after midnight on your birthday. A few years ago, the State of Minnesota outlawed the so-called “power hour”. We aren’t allowed to serve you alcohol until 8am on the morning of your birthday. Come back tomorrow, please. The bar will buy you your first drink, and, if I like you, I might even buy you your second one.

My favorite line was always “make me the strongest drink you can.” Guaranteed, I was going to roll my eyes and scowl at you the moment you said that. First of all, it’s clear the only reason you’re there is to get drunk, which is going to inevitably be a problem. Secondly, the strongest thing I can give you is a straight shot of Bacardi 151, and you don’t want that. There is no magical elixir that amplifies the potency of a drink. If you want a strong drink, then order a double (and pay for it). But know that I’m already counting down the time until I’m going to have to cut you off.

Does this sound like a recovering bartender working out some of his residual stress? Perhaps it is. But, folks, you have to know that it’s a tough gig. As you venture out for St. Patrick’s Day, please take some of this to heart. It’s going to make for a much better experience for everybody involved. Especially if you know what you want when it’s your turn to order.

Rich Larson is the publisher and managing editor of The Next Ten Words. Contact him at richlarson@nexttenwords.com. If you like what you’ve read here, please CONSIDER THIS.